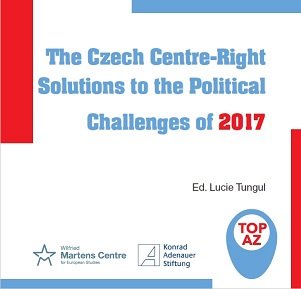 Common publication of TOPAZ, Wilfried Martens Centre for European Studies and Konrad Adenauer Stiftung presents nine topics of 2016 overlapping to 2017. We aim to lead an open debate, sometimes controversial but factual and based on facts. Our goal was to gain objective information with which it is possible to open discussion with expert and broad public.

With the UK leaving the EU the Czech Republic is loosing and important partner supporting liberalization of an international trade. This BREXIT impact should be compensate with increased level of involvement in the issues of neighbourhood policy and enlargement policy by the Czech side or should initiate serious discussion on entering the EUROzone.  We dedicated a special attention to the stance of the czech political and public scene towards european refugee crisis (for many of the EU member a controversial topic). The Czech Republic has got plenty of reservations against the european solutions but does no present any constructive alternative tools, which would be appropriate to change also with the support by right-wing non populist parties.

One of the latter chapters opens burning issue of czech economy competitiveness and its capability to provide positive environment for small and medium sized enterprises to business in the field of new technologies. The Czech Republic drop behind even despitethe fact it has the possibility to get an inspiration from successful models of neighbouring countries. Our environment is in far better condition than in was in 1989 but, even despite this, in many localities conditions endangering population health persist. Next huge problem, according to the next chapter of the publication, are megalomaniac projects which are lacking economical and ecological logic and are more of populists ourcries.

We dedicated space also for the changes of party system and onset of the business parties, where the strongest position belongs to ANO of Andrej Babiš. Parliament elections are going to take place in 2017. Actual polls predicate ANO’s big lead in front of other political parties. The ability to choose a suitable election strategy is based on the knowledge of oponents and understanding their strategy, understanding the voter and addressing him. It is suitable to remind how the czech party system evolved in the last decade and draw appropriate conclusions. It is a need that the czech democratic right-wing will coordinate its steps and face the danger of populistic solutions of one-man parties.

The publication is competed with the study of political communication and civic education. The topics have many in common. It turns out that the czech media space is parmeated with so-called infoganda, mostly of russian origin. Plenty of the citizens are not able to reveal it and they are not able to work with data. They are mostly pasive receivers of information and are not used to critical thinking and can not work with other opinions or stances. This problem unfortunately does not involve only older generation but permeates across all of the age categories.

Despite different topics and the author’s freedom most of the studies has many elements in common. Authors independently agree on fact, that the Czech republic should be more active and construtive member of the Europen Union and shoul cultivate its good relations with Germany and other countries of the EU core. Priority is to reach successful assertion of nation interests. The Czech Repoublic should also gain more and better from experiences of other EU member states whether in economical, social or cultural issues.

We will appreciate your opinion on the topics and any proposals of relevant topics for the next yearbook. We wish, that the publication will support open discussion in the TOP 09, between party members and supporters of the party and voters of the czech right-wing. Because the real discussion, as T. G. Masaryk said, is possible only if people trust each other and if they are trying fairly to find the truth. 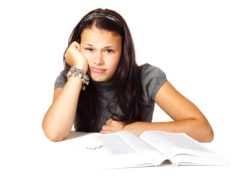 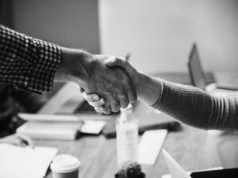 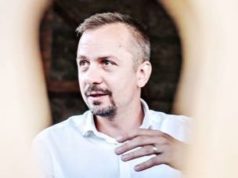